Show, Don’t Tell: A Writer’s Guide to Improving Your Storytelling 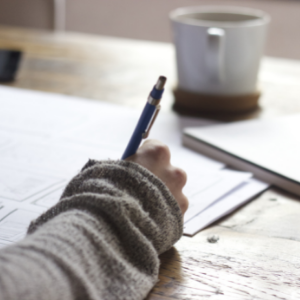 The world of writing is chock-full of helpful pieces of pithy advice. Think “write what you know” or “make time to write every day.” However, the golden rule of writing, particularly fiction, is “show, don’t tell.”

The challenge here is that showing rather than telling is, well, hard to do. That’s particularly true if you’re not entirely sure what this piece of advice means. We’ll break everything down for you here.

What do we mean when we say that you’re telling, instead of showing? It’s all about giving your audience sensory details about a scene, rather than writing it out directly. Here’s an example of telling, rather than showing:

In the sentence above, we’re giving you information, rather than providing details to help you come to your own conclusion. Here’s an example of how this could be changed by showing rather than telling.

His mother set a heavy casserole dish on the table with a thump. Steam rose from the gooey morass of cheese-covered pasta. Hands clenched under the table, Adam grimaced as his mother ladled a huge helping onto his plate.

In the passage above, you can clearly see that Adam is not a big fan of mac and cheese, but we don’t come right out and tell you that, either.

So, how do you go about doing the same thing in your own writing? Here are some simple but effective tips to help.

Where’s the action happening? Describe it in terms of action. Instead of saying, I walked through the forest marveling at the colorful leaves, you could say something like:

Orange and yellow leaves crunched underfoot and autumn’s tang brightened the air as I walked.

2. Use Dialog If Possible

When possible, use dialog to help show action. Was his reply short? Did she ignore his question? Dialog can give your readers clues about characters’ emotions and state of mind, which can add a lot of flavor to a scene.

One simple way to help show is to remove “telling” words from your vocabulary, at least while you’re writing. What are telling words? These can include things like “felt”, “heard”, “tasted”, and “smelled.” They’re words used to tell someone what a character is doing or experiencing. Instead, use words that put the reader into the experience.

For instance, suppose you have a scene where someone is sneaking up on the main character. You might be tempted to say something like, “She heard footsteps behind her and her heart skipped a beat.” Again, this is telling. Instead, consider something like – “Gravel crunched from somewhere behind her. Who was there? She whirled, breath hissing through clenched teeth, but there was no one there.”

It takes time and practice to remove telling from your writing. However, with practice, you’ll be able to catch yourself using those telling words and find creative ways to put the reader into the middle of the experience instead of telling them what your character is experiencing.